About the Bexar Archives

The Bexar Archives are the official Spanish documents that preserve the political, diplomatic, religious, military, economic, and social life of the Spanish province of Texas and the Mexican state of Coahuila y Texas. Both in their volume and breadth of subject matter, the Bexar Archives are the single most important source for the history of Hispanic Texas up to 1836.

The archives, housed at the University of Texas for more than a century, consist of approximately 300,000 pages of manuscript and printed records of the Spanish colonial province of Texas from 1717 to 1821 and the Mexican Department of Bexar (the area from the Nueces to the Sabine rivers, including the Texas towns of Anahuac, Brazoria, Velasco, Copano, Goliad, Gonzalez, and Nacogdoches) from 1822 to 1836. Texas eventually came to consist of three departments in the Mexican period: Department of Bexar (capital at San Antonio), Department of the Brazos (San Felipe de Austin), and Department of Nacogdoches (Nacogdoches). The remoteness of the latter and the need for documents led to the removal of substantial portions of the original Bexar Archives, which were sent from the capital at San Antonio to Nacogdoches. These documents became known as the Nacogdoches Archives after being transferred to the state of Texas in 1850.

The Bexar Archives reflect the growth and development of Spanish Texas and Mexican Texas. Earlier documents deal with the affairs of settlers from the Canary Islands and relations between the military, civil, and missionary communities that constituted San Antonio. Major topics during the eighteenth century include Indian policy and relations, military affairs, cattle raising, trade, legal proceedings, and exploration and communications. After 1803, the documentation also reflects a growing Anglo-American presence in the area, the development of trade and colonization, and currents of political unrest and revolution. As the affairs of Texas and the region grew in complexity, so did the volume of documentation in the Bexar Archives. Fully half of the collection represents the Mexican period (1821 to 1836). 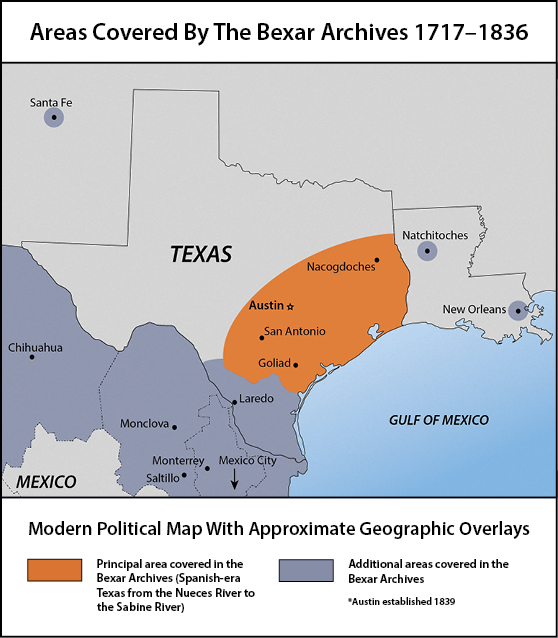 On behalf of the University of Texas, the Briscoe Center continues to enhance access to the Bexar Archives well beyond the original requirements of the 1899 gift. Endeavors toward providing access include microfilming every document in the collection, publishing an extensive index of proper names in the archive, digitization of collection documents, and the continued translation of period Spanish to modern English. The Bexar Archives Online project received TexTreasures grants in 2009, 2010, and 2011, with funding from the Texas State Library and Archives Commission and the Institute for Museum and Library Services.

Researchers can access the documents and microfilm in the Briscoe Center’s reading room on the University of Texas at Austin campus. Since much of the original order of the Bexar Archives had been disturbed over the years, University of Texas librarians and historians arranged all the documents—whether provincial, municipal, military, or private—into chronological order. Additionally, approximately 250 volumes of translations are available upon request for use in the reading room. Copies of these bound translation volumes are provided to the Bexar County Clerk’s office.