Robert Runyon's photographs of the Mexican Revolution (1910-20) represent a generally impartial eyewitness account of events in Northeastern Mexico from 1913 through 1916. Three hundred fifty unique images in the Runyon Collection document one chapter of the revolution which Runyon witnessed in Matamoros, Monterrey, Ciudad Victoria, and the Texas border area and surrounding area.

As various political and social factions within Mexico fought to topple a 30-year dictatorship to establish a constitutional republic, the struggle quickly spread to the northern border with the United States. In the north, rebel leaders such as Pancho Villa mobilized armies and began to raid the Federal government garrisons of then dictator Porfirio Díaz to aid in the cause of the "constitutionalists". Nervous U.S. officials along the border stood by and watched the conflict take shape.

In Matamoros, Runyon photographed the Constitutionalist armies as well as the major military figures of the campaign. On June 4, 1913, the day after General Lucio Blanco and his rebel forces captured the Federal garrison at Matamoros, Runyon moved throughout the city photographing the victorious soldiers, Federal casualties, and political executions

For more background information on the Mexican Revolution, visit your local public library. 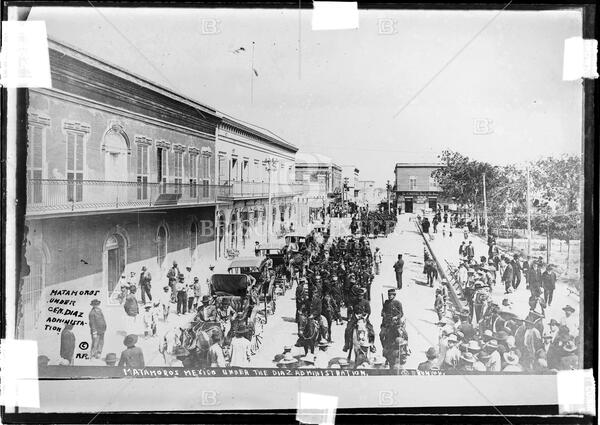 In the period before the deluge began in Matamoros, the army troops of Mexico's dictator Porfirio Díaz parade down Sixth Street (the main street) at the city's zócalo. Notably, only a sparse crowd of spectators witnessed the ceremony. The carriages belonged to the city's taxi system. 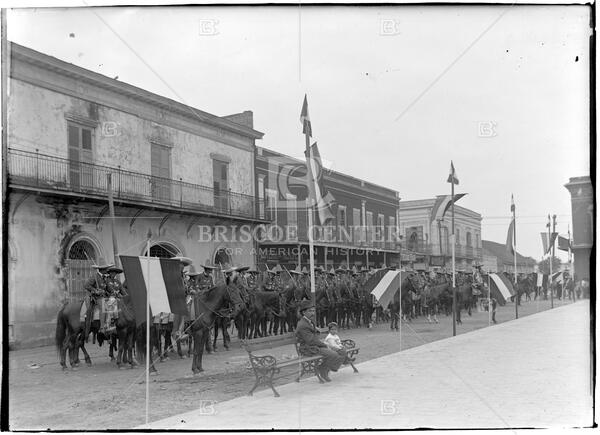 Mexico's internationally famed rural police force, the Rurales, was organized and expanded by Franciso Madero's victorious government during the first phase of the revolution. Many considered these Rurales the best constabulary in the world - even better than the Texas Rangers. This troop organized in Matamoros and fought for the Victoriano Huerto regime against the Constitutionalists and was scattered in the battle for the city in 1913. 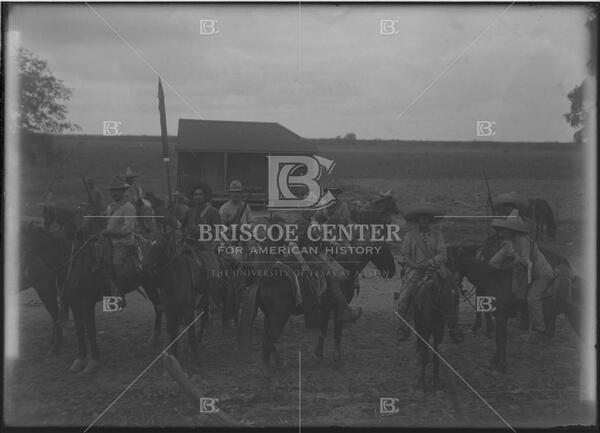 The Constitutionalists gathered momentum for their assault on Matamoros in April 1913. They needed to take an important border city in order to establish their legitimacy and to gain an entry port for war matériel. Runyon photographed this contingent west of Reynosa. It was a pick-up rebel army, forged by both volunteers and force as it foraged across the northeastern states of Coahuila and Tamaulipas. Well-armed and mounted, they were not all humble campesinos; the dress of many indicates they belonged to the better-off citizenry. 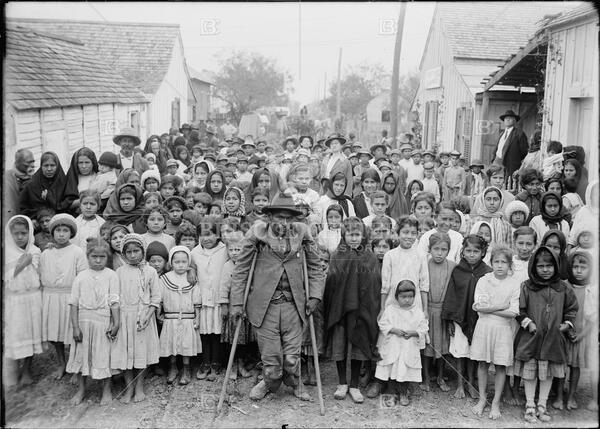 As Lucio Blanco closed in on Matamoros on June 1913 and Major Esteban Ramos, the commander of the federal garrison of the city, prepared to resist his attack, refugees of all social classes fled across the river to safety in Brownsville. While the well-to-do found comfortable lodging in hotels, many ordinary people, including those in this picture, flocked to the Charity House and overwhelmed its facilities. 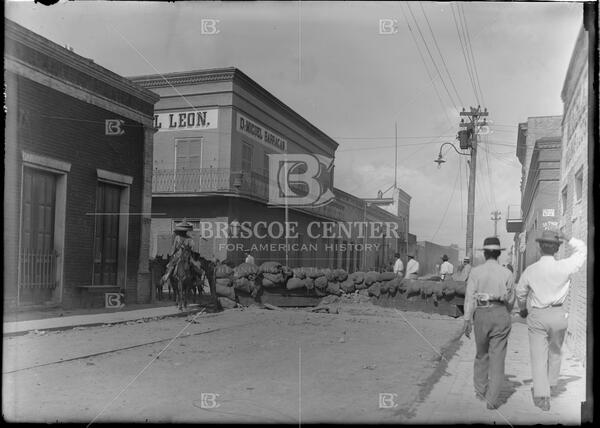 As the Constitutionalists approached, Matamoros braced itself. Defenders tossed up barricades across the major streets of the city: logs, railroad ties, sandbags, stones, and any other debris they could lay their hands on. Such barricades were meant to break the cavalry charges of the enemy. On the fringes of the city they dug trenches for the infantry and in front of them erected barbed wire fences which they then electrified. Dynamite sticks were laid as mines. Much of the defense was jerry-rigged but proved to be lethal. 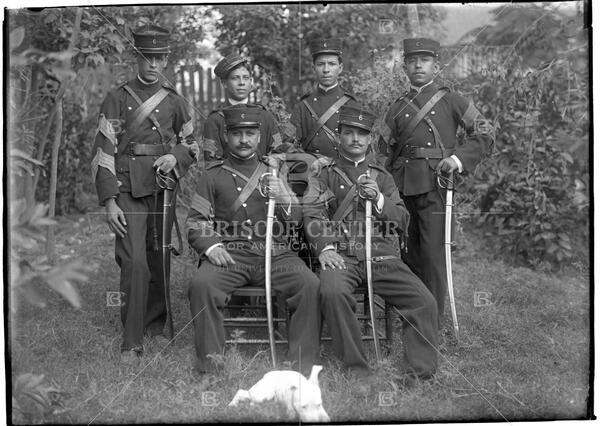 Fewer than fifty soldiers garrisoned Matamoros at the time of the impending attack. They were like these men; they looked fine in their uniforms, but most were young fellows who lacked military training. Reports that reinforcements were on the way emanated from Mexico City and other major military concentrations, but none ever arrived, and the federals never made any real attempt to retake the city. 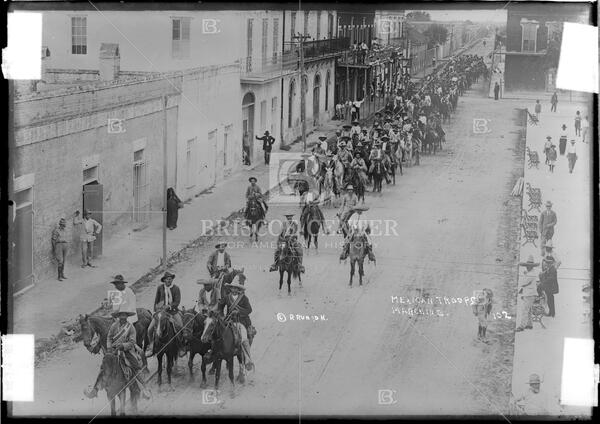 The federals, their situation hopeless, surrendered the city on the morning of June 4. Many escaped to Brownsville; others fled south. But as the Constitutionalists who had been held in reserve on the fringes of town rode toward the main plaza, they were unopposed. All day long they poured into Brownsville, and Runyon was there to capture their spirited arrival on film. 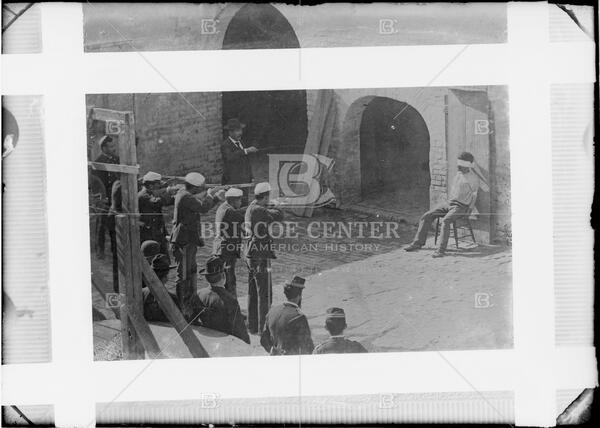 The victors showed only limited mercy to the vanquished. And in concert with the tragedies which inevitably accompany these kinds of encounters, they mercilessly executed some thirty of the prisoners they captured. Here they executed twenty-three-year old Antonio Echazaretta, who, as a volunteer himself who held the rank of colonel, headed up the contingent of volunteers who defended the city. Many Americans attended the execution, including the U.S. consul, Jesse H. Johnson. 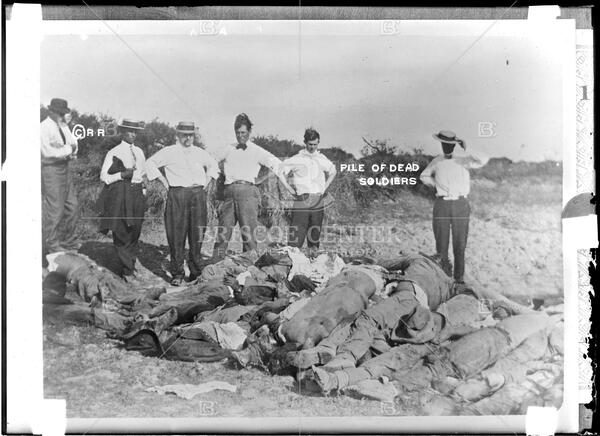 The afternoon of June 4 found survivors of the battle and others who had taken refuge in Brownsville back in Matamoros to assess the toll. It was quite high for such brief combat; more than one hundred dead and several hundred wounded. Because the defense included not only the regular army and the Rurales, but the local militia supported by volunteers, any number of families were touched by the horrors of the fighting. For days, people reported missing slowly filtered back into town. Meanwhile, bodies of the dead were burned on two huge pyres and the remains buried in common graves. The town itself escaped large-scale destruction, and Constitutionalist commanders controlled looting.