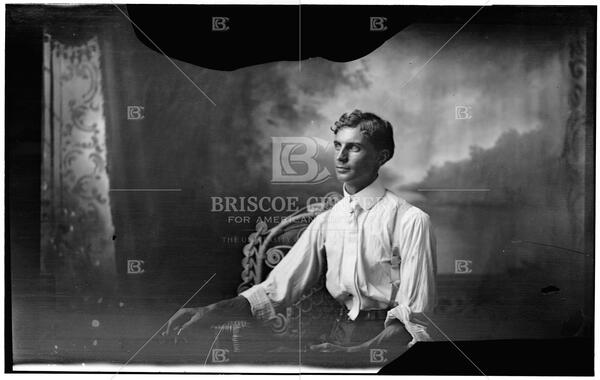 Robert Runyon was born on a farm near Catlettsburg in Boyd County, Kentucky, on July 28, 1881, the son of Floyd and Elizabeth (Lawson) Runyon. Like many farm boys of his generation, he received only a limited formal education that did not extend through high school, a handicap he overcame in later life through self-instruction, determination, and sheer natural intelligence.

On September 16, 1901, Runyon married Norah Young in Ironton, Ohio. The couple's only child, William, was born on August 6, 1904, in Ashland, Kentucky, where Runyon had taken a job selling insurance.

On December 3, 1908, Norah died. In an effort to put the impact of her death behind him, Runyon left William with his late wife's parents and went to New Orleans and then to Houston looking for employment. In early 1909 the Gulf Coast News and Hotel Company hired him to sell sandwiches, fruit, candy, and cigarettes to passengers on the St. Louis, Brownsville, and Mexico Railway between Houston and Brownsville, Texas. Within a couple of months the railway offered to make him manager of Gulf Coast's lunchroom and curio shop in the Brownsville depot. Runyon accepted the position and, in April 1909, rented a room across the street from the railroad station and began a period of residency in Brownsville that continued without interruption for fifty-nine years until his death in 1968.

Arriving in Brownsville, Texas, in 1909, Robert Runyon entered a world very different from his native Kentucky. With its tropical climate and close proximity to Mexico, the town embraced two cultures and thrived on diversity. Throughout the rest of his life, Runyon took an avid interest in studying and recording this unique area. His photographs of the Lower Rio Grande Valley and Northeastern Mexico both document the region's history and stand as testimony to Runyon's affinity for the land and its people.

Runyon returned to Kentucky in the summer of 1910 to bring William back to Texas to live with him. On July 31, 1913, Runyon married Amelia Leonor Medrano Longoria, a young woman from a respected middle-class family with deep roots in northern Mexico. Between 1914 and 1926, Amelia bore five children: Lillian, Amali, Virginia, Robert, and Delbert.

Robert Runyon worked as a commercial photographer from 1910 to 1926. During that time, he focused his camera on the mundane and the dramatic alike. His first images recorded urban life in Brownsville and Matamoros as well as the Rio Grande terrain. Then, during the summer and fall of 1913, he turned his attention to political events in Mexico as the Mexican Revolution reached the Texas border. On June 3, General Lucio Blanco and his Constitutionalist forces captured the Federal garrison at Matamoros. The next day, Runyon moved throughout the city, photographing the results of battle. He later recorded Blanco's land distribution cerermony and Los Borregos in August and proceeded to travel with Blanco's army south to Ciudad Victoria. Several months later, he returned to photograph Revolutionary events in Monterrey. Back in Texas, Runyon also photographed the results of two 1915 bandit raids across the U.S. border: the August 15 raid at Norias Ranch and the October 10 train wreck at Olmito. Although small in number, Runyon's images of the Mexican Revolution have great historical significance. The conflict between Rebels and Federals in Northeastern Mexico has gone largely undocumented; his photographs provide a unique record of this important event.

As the Revolution intensified, the United States responded by activating Fort Brown and transferring soldiers from across the country to the Brownsville camp. Runyon prodigiously recorded this military buildup and the subsequent preparations from U.S. entry into World War I. His photographs show the military transition from animal to mechanical power that occurred during this time period as well as the soldiers' camp life and leisure activities. As with popular subjects such as bullfights and Mexican Revolution casualties, Runyon sold many of his Fort Brown views as postcards to the soldiers and to Valley residents and tourists.

After the tumultuous decade of the 1910s, Runyon returned to familiar subjects in the peaceful and prosperous 1920s. He continued to document city life in the Lower Rio Grande Valley and in Matamoros, Mexico, and he also took many photographs of local beaches, lakes, and, especially, the Rio Grande. He began to pursue a growing interest in botany as well and used his camera to record native plants, including palm trees, yucca, and cactus. Runyon also continued to make and market postcards, but his most profitable enterprise during the early 1920s was studio photography. He aggressively promoted his small studio opposite the Brownsville railroad depot, drawing in thousands of customers and enjoying unprecedented popularity as a commercial photographer. In addition to studio work, he photographed school groups, sports teams, and the numerous excursion groups which came to Brownsville in the early 1920s as potential participants in the Valley land boom.

By 1926, however, Runyon decided to leave commercial photography for the more profitable trade in curios and souvenirs. He became a partner with this brother-in-law in a curio store in Matamoros, and later owned a store in Brownsville. Although he continued to take pictures of plants in conjunction with his botanical studies, after the late 1920s Runyon built his reputation as a highly successful amateur botanist and local politician rather than a photographer. Runyon published two books on native plants, Texas Cacti (1930) and Vernacular Names of Plants Indigenous to the Lower Rio Grande Valley (1938), and in the 1920s began a crusade to save the native Texas palm, Sabal texana. Local politics became Runyon's passion in the late 1930s. He was appointed Brownsville city manager in 1937 and in 1941 was elected mayor. The "stormy petrel" of Brownsville politics, as Runyon was known, held the position through 1943. In 1952 he unsuccessfully ran for Texas House of Representatives. Runyon published a newspaper in the 1940s and wrote a small volume on family history, Genealogy of the Descendants of Anthony Lawson of Northumberland, England.

Robert Runyon died on March 9, 1968, in Brownsville after a short illness at the age of eighty-seven.

Texas folklorist J. Frank Dobie, an acquaintance of Runyon, best summed up his life: "You have to admire a man like Runyon, who cuts off a little hunk of the world and dedicates a lifetime to its study."