Russell Lee took 340 photographs throughout Corpus Christi in April 1949. During one of his trips, Lee accompanied Dr. Hector Garcia on medical rounds through the barrios. In another series of photographs, Lee shows the intimacy of home healthcare and how families coped with tuberculosis. During the time of Lee's visit to Corpus Christi, the county had registered over 8,000 cases of tuberculosis.

Two other series of photographs focus on labor agents as they sign up and dispatch men to the beet fields in Michigan, and on the reburial services for a WWII soldier killed in action. The photographs likely represent the reburial of Corporal Theodore Esquivel, whose services were announced in the Friday, April 22, 1949 issue of the Corpus Christi Caller. The obituary informs us that Esquivel had been killed in action in Belgium four years before.

An unusual set of portraits detail the work of Mexican-American commercial fishermen and shrimpers. Always with an eye toward fixing time and place, Lee captured a newspaper stand that hints at the date of one of his visits. The issue of the Corpus Christi Caller on display at the newsstand is dated Friday, April 8, 1949. Some readers may recognize the Tex-Mex Newsstand, La Malinche tortilla factory, Estrada Motor Sales, and the second-hand shop at 2218 Agnes. Images of the Presbyterian Church and of the Sacred Heart Catholic Church may also be of interest. 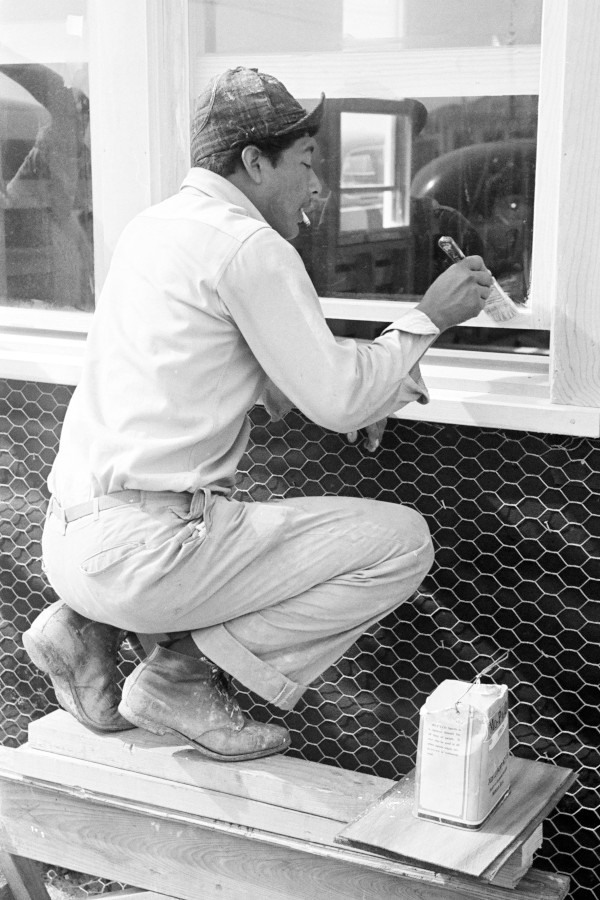 Russell Lee visited El Paso in July and August, 1949. Lee joined Lyle Saunders, the director of the Study of the Spanish-Speaking People on a fact-finding tour and at meetings with various civic groups in El Paso. At the time, the need for new housing and the renovation of existing substandard boarding houses absorbed the community. Several dozen photographs detail housing conditions in the tenements and provide contrast to the new small homes that were being built away from the center of town. Other concerns of the period were unemployment and inadequate sewer and water systems. Children found relief at the Armijo Park Bathhouse and in bicycling nearby. 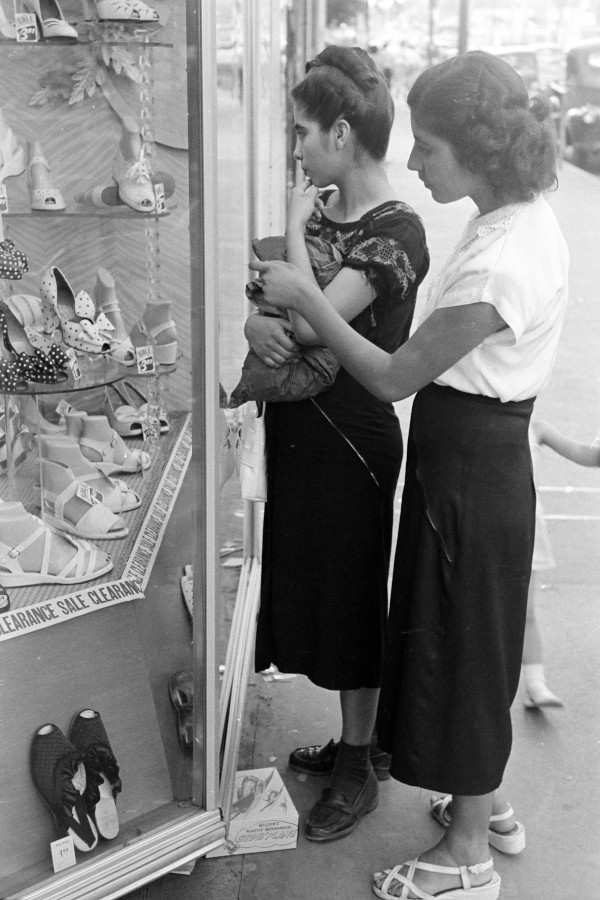 During May 1949, Russell Lee visited San Angelo, Texas at the peak of the sheep-shearing season. Lee photographed ranchers clipping and shearing the sheep, grading their wool, and marking the sacks of freshly sheared wool. According to the notes Lee entered in his log, the men on the shearing crews moved from ranch to ranch, seldom going home during the season. The shearing work accelerated as the month of June and the end of the season drew nearer. On a rainy day when conditions made work difficult, Lee joined the shearing crews and various other workers at a beer parlor in town.

The work and leisure scenes of the adult world contrasted sharply with those of schoolchildren. Boys and girls of various ages attended classes and ate their school lunches together, but separated at recess so the boys could organize one of their favorite activities—baseball. Although attendance at school by individual students may have been haphazard, the school day was highly organized and supervised by adults. Lee’s photograph of a line of hungry schoolchildren at mid-day provides a glimpse of the order in the lunchroom, which Lee described as clean and attractive but crowded.

Of the four communities that Lee photographed in 1949, San Angelo may have presented the sharpest break with custom and tradition as the economy grew away from ranching and sheep-herding. More and more Texas agricultural workers were joining migrant laborers in the beet fields of the northern states. In this series of photographs, Lee documented the movement of agricultural workers from Laredo past Sonora and beyond, as well as the suburban expansion to the south of San Angelo, which catered to the Mexican-American families who settled there.

With the addition of Goodfellow Air Force Base in the 1940s, the area around San Angelo attracted newcomers and began to diversify economically. As the county seat and home to Angelo State College, San Angelo was becoming much more than the center of the wool trade in the United States. For the Study of the Spanish Speaking People of Texas, Lee provided both a photographic record and detailed information in his notes about how these families made a living, what they earned, and what they paid in rent, for land and to build homes. 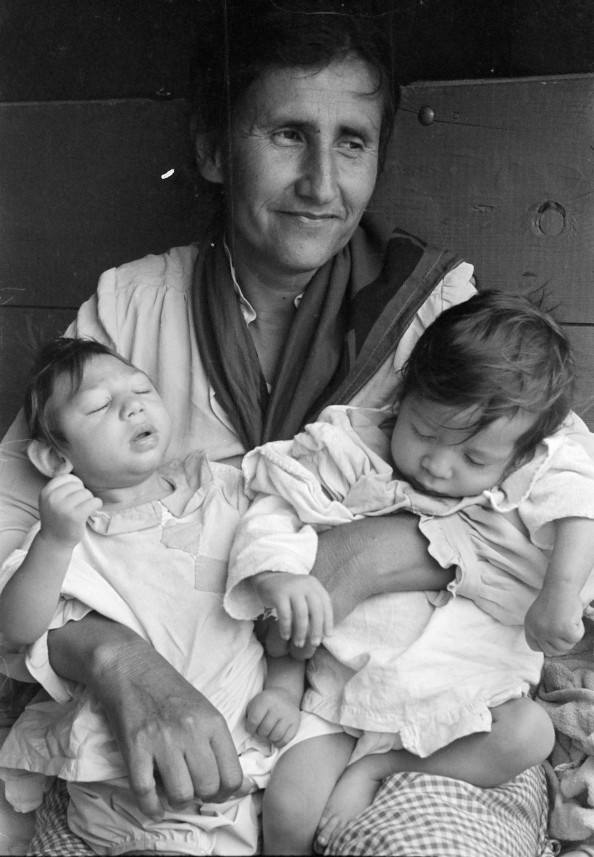 A mother with her babies. San Angelo, TX.

Because Lee had photographed San Antonio for the Farm Security Administration in 1939, the directors of the Study of the Spanish-Speaking People were particularly interested in having him revisit that city in 1949. Lyle Saunders noted in a letter to co-director George Sanchez, "We will thus have at least for one city, a documentary record of the improvement or lack of improvement in the conditions of the Spanish-speaking during the past years." By improvement they meant not just economic betterment, but the integration and assimilation of hispanos and mexicanos into the mainstream of Anglo community life and the resolution of "cultural indigestion." To them, cultural indigestion was the result of adding illegal entry of Mexican workers to already existing regional health, housing, and employment problems in the southwest.

The exuberance and beauty of Lee's images may have influenced the exclusion of the commissioned photographs from the pages of the Study. The Study was seeking to address and encourage resolution for what Saunders and Sanchez perceived as the underlying causes for the residual segregation, ill health, unemployment, and destitution felt at the time by many Mexican Americans. Many of Lee’s photographs did not support this mission, but argued against it. In the photographs, well-being appears to be rooted directly in Mexican and Mexican American culture. Traces of that cultural life in bars, restaurants, movie houses, bingo halls and farmers markets fill these photographs.

Of special interest in the San Antonio series is a set of images taken at the radio studio of KCOR, the first radio station in the United States to provide day-long programming entirely in Spanish. The preparations and proceedings of a Pan American Progressive Association meeting reveal the nature of community debates in the San Antonio Mexican-American community. Suburban expansion and the development of San Antonio are marked by billboards such as the one promoting Villa Aldama. 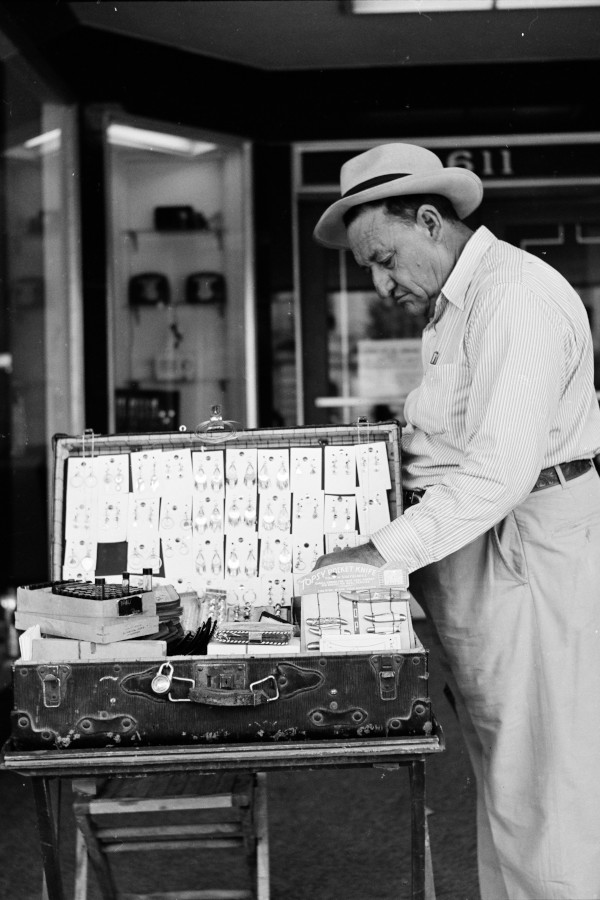